A history of resilience.

Ohio Art has reinvented itself several times in the 112 years of the company’s existence.

Henry Winzeler, who founded the Bryan, Ohio, company in 1908, started out making metal picture frames and 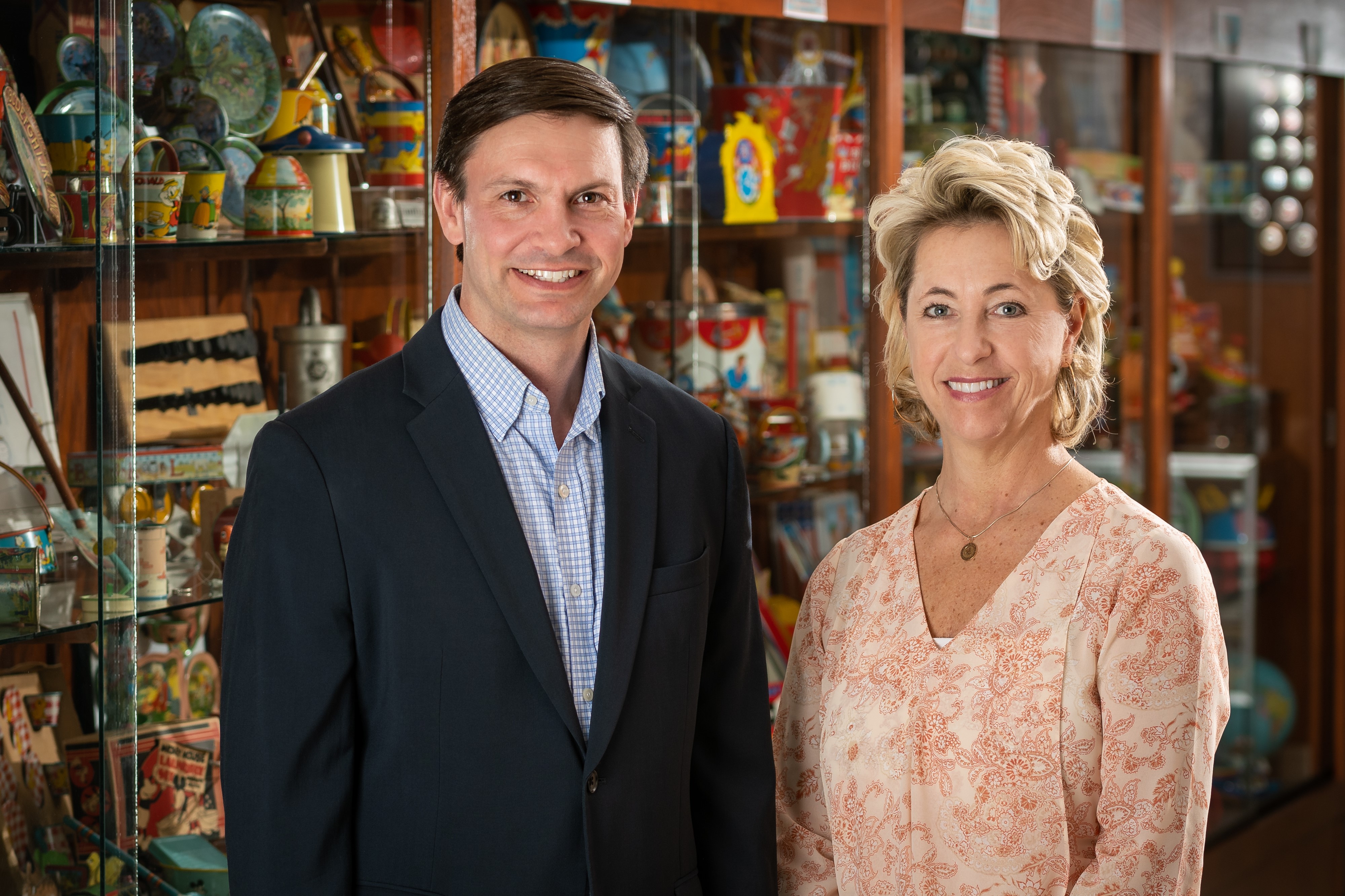 buying photographs to put in them. The framed images were sold in Woolworth’s, five-and-dime stores and the Sears catalog.

Winzeler sought other ways to use the lithography machines he had bought to decorate the metal and, around 1918-19, began making toy tea sets. “It was just a huge success,” says Elena West, Ohio Art’s CEO. By the mid-1930s, the company had shifted away from picture frames and was primarily a toymaker, although it continued producing a few items outside the category. In 1928, it negotiated a license with Roy and Walt Disney to make toys featuring Mickey Mouse, Donald Duck and other characters, a project that continued for decades.

During World War II, Ohio Art, like many American companies, focused on aiding the war effort. The company stopped making toys in 1942 to produce gunsights, bomb whistles and other parts needed by the military.

After 1945, the company returned to toy production. By this time, parents were shying away from metal toys, fearing danger to their children, and the company began incorporating plastic into its lines. “Once again, Ohio Art decided that they needed to pivot,” West says. “That left a big open opportunity for the business to look at other things they could potentially do with their machinery.”

To complement its toys, the company began making metal products such as TV trays and “butt buckets” (buckets that were filled with sand and used as outdoor ash trays).

Meanwhile, on the toy side, the company introduced the Etch-A-Sketch, a mechanical drawing toy, in 1950. Ohio Art shifted to making plastic tea sets. It also made globes and Chinese checker sets.

By the late 1980s, Walmart had become a retail powerhouse and was demanding low prices from its suppliers. To accommodate the large customer, Ohio Art moved manufacturing to Asia. “That left an open opportunity for the business here in Bryan to diversify even further,” West says. “And, again, that was where the metal lithography came into play.”

Second-generation owner Bill Killgallon — West’s uncle — asked his brother, Larry, to join the company and start a diversified products business. The new division “reinvented the company to focus on what we could do outside of toys to continue to be prosperous and keep everyone employed here in Bryan,” West says.

“We still do a lot of food product, and that’s one of the reasons we’re considered an essential business [during the COVID-19 pandemic], because we support the food industry,” West says.

West joined Ohio Art in 2013 and became its CEO, working alongside her cousin Martin L. Killgallon III, the president. By that time, the challenges of the toy business had multiplied. Big-box retailers dictated pricing and packaging.

“Small, mom-and-pop businesses were going out of business all the time, the specialty market was also becoming narrower and the opportunity was just going away,” West says.

When West and Martin Killgallon began working together, “one of the first decisions we made as a team was to focus the future of the business on the lithography side versus the toy side,” she says. That included selling the Etch-A-Sketch brand to a Canadian toy company, Spin Master.

West calls the move “probably the best decision we ever made. Because since that time, so much has happened in the toy business that would have really crippled us even further,” including the bankruptcy of Toys R Us, tariff issues and the coronavirus.

“It was a really big decision, because the toy business was our heritage and our livelihood, and that was really the exciting part of the business. We traveled all the time for toys, and it was really a major part of our identity. And the lithography business was less exciting. But it was solid.”

When West was a college student, 300 to 400 people worked in Ohio Art’s Bryan factory. Today, the company has 85 employees.

Because Ohio Art uses Chinese suppliers to make components for its inks and varnishes, management noticed the coronavirus spreading in China before it came to the United States. That sparked the company’s quick implementation of precautionary measures.

“We were already looking at our supply chain early on, making sure that we had plenty of material to get us through to the next large order that we anticipated for the year,” West says.

“As soon as the first recommendations came out from the governor’s office here in Ohio, we implemented them immediately in our factory.”

West is in the office daily and personally manages the company’s COVID-19 response.